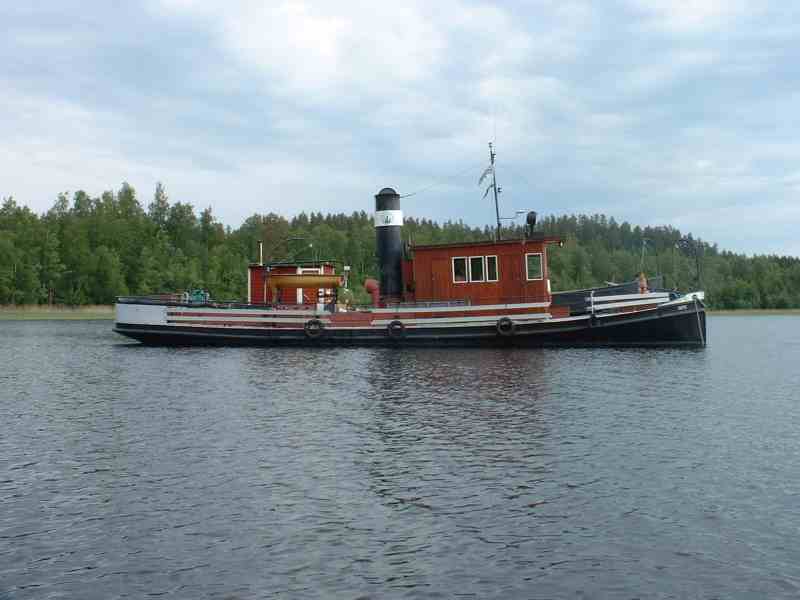 The story of the ship begins in 1899, when it was built at the Vulcan workshop in Turku. The client was Akkas Ångsåg Ab, founded in 1873, which had a sawmill in Viiala. In 1890, a glass factory and later plywood and particle board factories were also built in connection with the sawmill. However, it used its tug named “Akkas” mainly in its shipments to Turku. In 1911 it got a new boiler. The vessel was sold in 1924 to the inland waters of Pielavesi Säviä for the ownership of Pielavesi Forest Cooperative. As Tapio, it began towing logs to the cooperative’s sawmill and lots of board cargo to Iisvesi. There is press information from this period that Tapio opened the fairway from Säviä to Pielavesi on May 4, 1925. Due to bad economic conditions, the sawmill ceased operations and Tapio was sold to Iisveden Metsä Oy in 1929. The purchase price was more than FIM 300,000.

With Iisvesi, the ship was repaired and it began its daily toil to tow logs for the sawmill. 1936 Tapio underwent a major renovation. Its base was rebuilt, a new jet condenser was installed to replace the old dry steam engine, and its deck structures were rebuilt. The new plane was built in 1911, it was obtained from a dismantled ship in Kallavesi. With his new plane, the ship was quite fast. The ship’s crew was proud of their ship, and outright watched for a suitable opportunity to race. Tapio was a barge tug. The Pielavesi Forest Cooperative had already built at least four nearly 30-meter barges for this purpose, called Tapio I-IV. They moved with Tapio to Iisveden Metsä. This already had its own barges. In addition to towed lots, Tapio had a lunch box, which has been used by the former tug Syväniemen Rovi since the 1950s.

Tapio’s professional transport career lasted an exceptionally long time. It was in progress as Finland’s last commercial steamer in the summer of 1986, after which it was sold for private use. This moved the ship to Päijänne, where it has been sailing ever since. It keeps its home port in Jämsä.